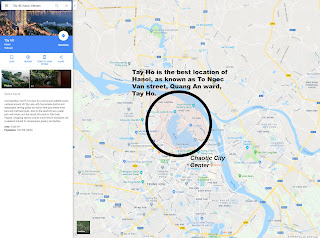 To Ngoc Van street, Quang An, Tay Ho commonly known as the American neighborhood of Hanoi.

Friends or strangers of internet, Welcome to Hanoi, Tây Hồ ( phố Xuân Diệu and phố Tô Ngọc Vân area) is the best area of Hanoi that All new comers choose to stay. Most American teachers and expats I know in Hanoi live in Tây Hồ, Quảng An ward. You will easily find room about 200$-300$ and jobs here specially if you are qualified as the company or education centers required. Enjoy living the good life and beautiful neighborhood.  https://www.google.com/mymaps/viewer?mid=136k4kaQtMwIXqRCxlwffoovuBmc&hl=en_US

I have lived in Hanoi for 10 years and know aplenty of american buds who are also living in Hanoi some just as long as me, some even longer and married a Vietnamese and set their roots deep in Hanoi or some fresh faces just off the boats from the US of A.

Why is Tay Ho, Quang An ward  the most awesome neighborhood of all Hanoi?

Example 1:
It is Thanks giving
You are homesick, alone, missing something to remember you of home(aka turkey and stuffing)
Where do you get it in Hanoi?

After I asked Hanoi Massive, the only best forum of expats in Hanoi. I found out that Jomas 43 To Ngoc Van, Tay Ho or Donkey Bakery 8 Nguyen Hoang Ton, Tay Ho have them. Only in Tay Ho in Hanoi has turkey american style ordering.

This is:)
This is what I got for last Thanksgiving of 2017, still delicious to look at( I, in no way, work for the place or want to advertise for them, am just showin u the menu so you know that you won't starve yourself on the next thanksgiving in Hanoi and many more to come if you decided to stay long term in this beautiful city. 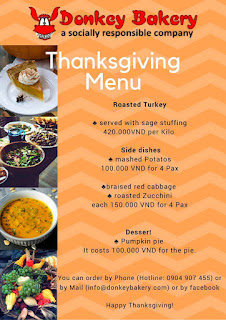 If you love Christmas, then Tay Ho is definitely lighted up and festive during Christmas compared to the center of Hoan Kiem. (in a real Christmas spirit way).

Example 2:
You got annoying ear wax and need it to be removed to hear properly( some people they remove ear wax regularly) or need some blood test of some kind(sugar for diabetes, stds, etc...)
Medlatec is where to get blood test for the cheap and it is only 5 minutes from Tay Ho, it even has a smaller branch south of West Lake.

You found a really really cute Hanoi girl and want to impress her with an awesome date or just something casuals
Most expatriates in Hanoi live in the street To Ngoc Van and Xuan Dieu, Tay Ho and so are all the French bakeries with superb restaurants, pools, gyms ( to  check eachother out? why not). also Most places in Tay Ho are quiet and not as beep beep beep noisy like the Old Quarter.

You have a sudden craving for some lamb or Turkey? but you are in Hanoi.
Metro MM Mega Market has both Lamb and Turkey. Same frozen turkeys that L's place in Xuan Dieu.
Metro MM mega Market is just 10 minutes from Tay Ho by taxi. (address: Mega Market MM Pham Van Dong, Hanoi, every taxi knows by just telling them) It is the Vietnamese Costco.
P/s They also sell lentils xD. and on the cheap.

When you made it to living in Tay Ho, Hanoi, then you are already living in the best area in Hanoi, 10 times better than the chaotic old quarter, a lot of jobs around here too and they pay a lot more too.
Good luck and voi'la, you might be a Hanoian someday! ( non-vietnamese version of Hanoian xd) 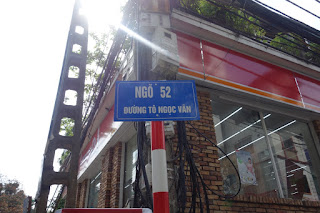 Fun Fact: Hanoi has more than 50,000 foreign expats living and working. After all the expats realized that HCMC is nothing more than a city that dreams to become Bangkok with all the hassles, increased gang crimes and the weather there was hot/rainy/sweaty all year round, they then prefer somewhere that is more cultured and has an acceptable cooler winter but still as big of a city that is Hanoi. I bet the number is almost even between Hanoi and HCMC recently.
Posted by bitch at 7:42 PM No comments: